What I Haven't Read 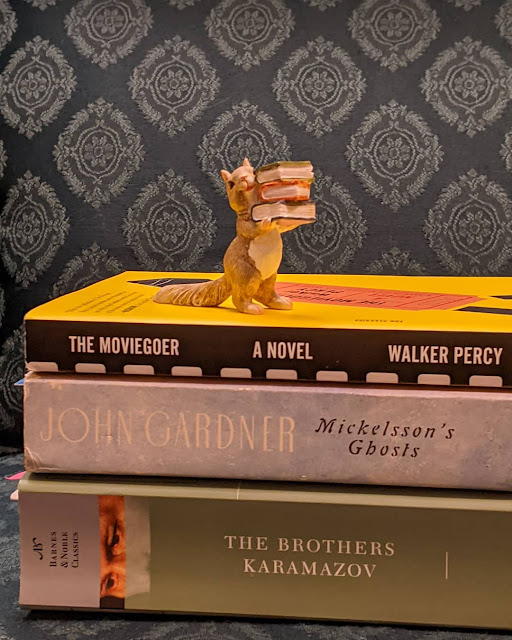 I still haven't read The Moviegoer or The Brothers Karamazov or White Noise or The Sound and the Fury or Mickelsson's Ghosts or any of those other books that, back around 1985 or 1986, I decided--was told, got the impression--that I ought to read. I still feel, all these years later, a little guilty, a little embarrassed, for never having read them--though I've started all of them more than once, and I still have copies of some of them.

Why should I feel guilty? Whose condescension and judgement makes me feel embarrassed?

For some people--people like me, at least--this is one of the downsides of being a book-loving person and going to college and majoring in English, and especially of going to graduate school in English: the feeling of not having read the right things, of not having read what your professors, your colleagues, the writers you admire, the people who work at Barnes and Noble, all think you should have read.

I've read a dozen of Vonnegut's novels and several by Nabakov. I've read The World According to Garp, and The Ballad of the Sad Café, and Wise Blood and all of O'Connor's short stories. Most of John Cheever's stories, and lots of Eudora Welty's stories (but none of Cheever's or Welty's novels). For a while I had both "The Love Song of J. Alfred Prufrock" and "The Second Coming" memorized (but at this point I've probably forgotten as much as I remember). I've read If On a Winter's Night a Traveler, and We Have Always Lived in the Castle, and I've read Zen and the Art of Motorcycle Maintenance five or six times.

But it's the books I haven't read that I think about the most. I know that's a defect in my thinking. I'm trying to get over it.

I know there are book-type people, people with degrees in English and even with jobs teaching English in colleges, who don't have this feeling of embarrassment, of anxiety about what they think they ought to have read but haven't. I envy them; I want to know what their secret is. I also rather suspect they're lying.

And I still think I ought to read The Brothers Karamazov.