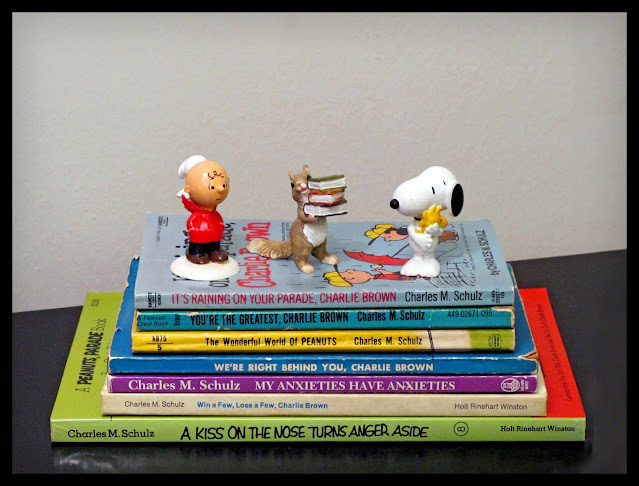 I don't know how old I was when I first read Peanuts. I'm pretty sure it was sometime back in fourth grade, maybe even third, when I started my relationship with these books.

And for me, Peanuts was always about books. I'm sure that for years I was not even aware it was a daily comic strip, probably didn't even know what that meant—but I knew the books. "A Charlie Brown Christmas" was on TV for the first time two years before I was born and had become a seasonal staple by the time I was in fourth grade, but I don't remember seeing it when I was a kid, or seeing any of the other Peanuts TV specials that had been produced by the time I was in fourth grade—but I knew the books.

I've been collecting them, the books, for more than forty-five years. I don't actually have that many—forty-two: I just turned around and counted them—but they are precious to me.

Not everyone cared for Peanuts as much as I do, of course. Al Capp, creator of the "Li'l Abner" comic strip and a generation older than Peanuts creator Charles Schulz, once famously characterized the kids in Peanuts as "...mean little b*stards. Eager to hurt each other." Maybe Capp had a point, but he didn't seem to appreciate the fact that this made them all the more real as kids and as human beings, and that it made the moments of truth and beauty they revealed, either by transcending the inherent melancholy of life or by accepting it, all the more beautiful.

"Life is rarely one way, Charlie Brown," Linus says to his friend as the two lean against the brick wall where they do all their philosophizing, "You win a few, and you lose a few."

Books I Have Lost 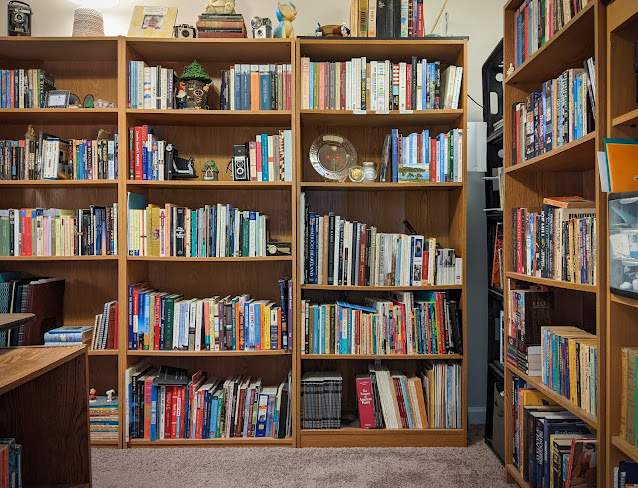 Not everyone who loves to read values books as physical objects; plenty of people love reading but don't need, or even want, to be surrounded by bookcases filled with books.

But I do. I value books as physical objects, and I want, maybe even need, to be surrounded by bookcases filled with books. It makes me happy.

And it really bothers me when I lose a book. Three years ago when we moved into our current house, I had boxes and boxes of books to move and unpack, and at some point--several months, actually--after I was done, I realized there were some books I couldn't find. It's possible I got rid of those books in a fit of downsizing, but I doubt it--the books in question I don’t think I would ever have wanted to get rid of, and one of them, Thomas Merton's The Seven Storey Mountain, is a book I did get rid of once, and then bought another copy of some months later when I found that I wanted it back. I'm afraid that somehow amidst all the hubbub of our move I lost or misplaced a whole box. (And what else may have been in that box that I haven't missed yet?)

Whenever I get rid of books I regret it. Oh, I don't miss every single book I've ever gotten rid of, but I'm never sure which books I'll miss and want back. About twenty-five years ago I read The Magus by John Fowles; it was brilliant and compelling, but also long and challenging, so at some point I got rid of it. I wish I hadn't. I doubt I'd re-read the whole thing again--though I might--but it would mean something to me to have it on my shelves. I also used to have a great hardback Modern Library edition of Emerson's essays, but I got rid of it because Emerson's work has long been in the public domain and is readily available online if I want to read it on my tablet, and the book was taking up valuable shelf space...

The next time I get the idea to purge some of my books, I'm going to box them up and put them in the attic instead of getting rid of them. That will make it easier to get them back three months later when I decide I do want them after all, and will give me the pleasure of going through the box and finding some things I'd forgotten about.