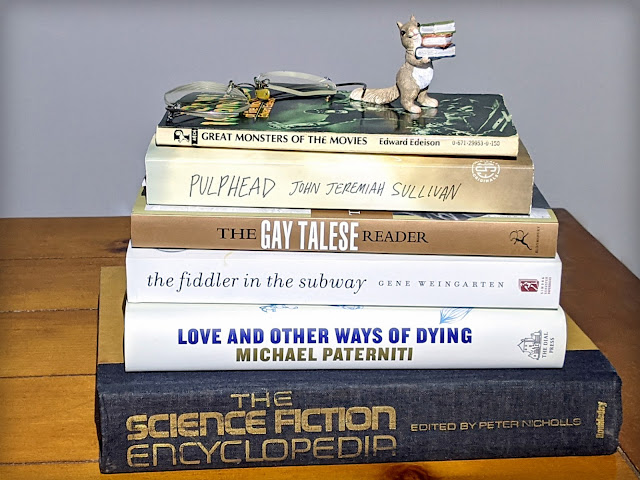 When I was a kid, reading to me meant specifically fiction. If it wasn't a novel, I didn't really think of it as "reading."

But I realize now that I read a lot of non-fiction back then. The earliest non-fiction memory that I can hang a book title on, and which is also one of my most pleasant library memories, is of Edward Edelson's Great Monsters of the Movies, which came out in 1973 but which the Bethesda library didn't get until I was in third grade in 1975. The librarian--whose name I wish I could remember--set it aside for me when it arrived and gave me the honor of being first to check it out. She knew I would love it. She was so right!

The Bethesda library also had this great book about reptiles that I kept checked out nearly constantly in fourth and fifth grade, and I read books about dinosaurs, and the Loch Ness monster and Bigfoot (some books about one or the other, some books that included both), and various supernatural goings-on (C.B. Colby's Strangely Enough! being one I remember well; I have two copies of it now). When I got older, I read books about lasers and music and other things that interested me, and when I began to get seriously involved in science fiction, I read through the Berkmar library's copy of Peter Nicholls's The Science Fiction Encyclopedia (the original edition, from 1979) every chance I got. I eventually found my own copy of it at Book Nook, but it’s missing that cool dust jacket.

For the last decade or so, I haven't read many novels, but I've read a lot of non-fiction, especially short works, mostly feature stories and personal essays; I'd now say it's my second favorite literary form (after the short story). Gay Talese, Gene Weingarten, Michael Paterniti, Malcolm Gladwell, John Jeremiah Sullivan, and Hampton Sides have all published fantastic collections of their magazine pieces, and there are also personal essays I love by the likes of Bailey White and the great E.B. White (no relation to Bailey White that I'm aware of; in fact, I just realized in typing this that they have the same last name!).

I now most definitely think of non-fiction as reading.