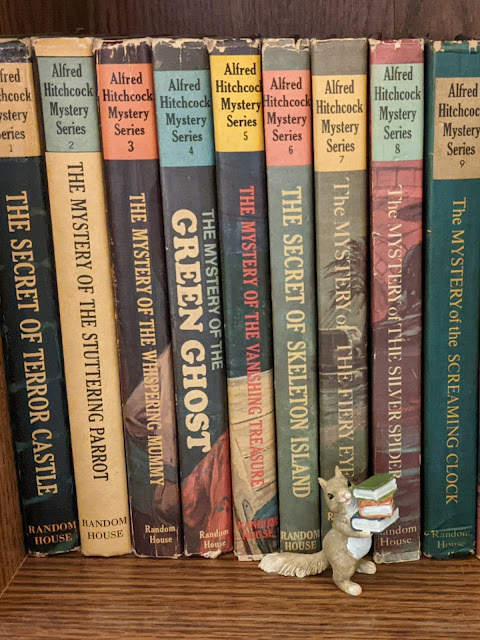 These are the books that made me fall in love with reading and books, forty-five years ago.

When I say that, I mean that these are literally the books--these actual copies--that I started reading in 1975, thanks to my cousin Sharon (who, I am very sorry to say, is no longer here with us for me to thank for starting me off in this direction), and which I collected and read and re-read voraciously for several years, and which I've had as an important part of my personal library for nearly half a century.

The series--Alfred Hitchcock and the Three Investigators--was created by Robert Arthur in 1964; he wrote the first nine books, and also the eleventh, and when he died in 1969, the series was continued by various other writers for almost two decades more, ultimately reaching forty-three volumes. (It's actually a little more complicated than that, but that's enough of an explanation for this post.) Alfred Hitchcock didn't really have anything to do with the series, he just allowed his name and likeness to be used in the books. The Hitchcock introductions to the books were in truth written by the books' authors, and when Hitchcock died in 1980, the series switched from the real (but no longer living) Hitchcock to the fictional mystery novelist Hector Sebastian. Gradually, all of the original series was revised and republished to feature Sebastian instead of Hitchcock.

The first sixteen books included great illustrations by Harry Kane; those illustrations are an important part of what made me love the books. I'm still disappointed that more novels don't feature illustrations every thirty or forty pages to show you what everything looks like. (Frankly, The Brothers Karamazov could do with a few. If it had some illustrations, maybe I could actually finish the darn thing. Or at least get past page 75. But I digress...)

I've re-read these books--especially the ones by Robert Arthur--a number of times over the years. They hold up pretty well. Nothing's as mind-blowing as being an eight-year-old and discovering them for the first time, but they're still pretty fun.