The Science Fiction Hall of Fame Vol. I: Another Book Post 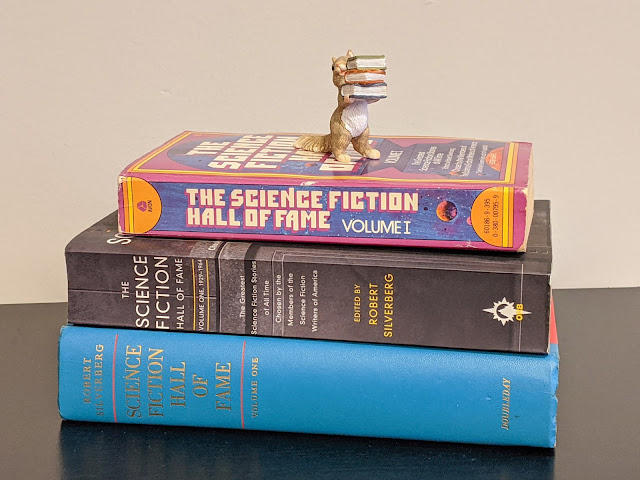 The Science Fiction Hall of Fame, Volume One

This picture shows three different editions of the same book; they are all mine and I took them down from the shelf to take this picture, but none of them is the actual copy I owned and read and loved as a teenager, back around 1985 or so (however, the copy I had was the same as the smallest one shown here, the Avon paperback). And man, did I love this book! It has some fantastic stories in it, including all of the early stars of SF: Asimov, Heinlein, and Clarke, of course, but also Simak, Sturgeon, Leiber, Bester, Boucher, and many others. There are twenty-six stories in all, one of which was adapted into a famous episode of "The Twilight Zone" (Jerome Bixby’s "It’s a GOOD Life"), and two of which were made into "Star Trek" episodes ("Arena" by Frederic Brown and "The Little Black Bag" by C.M. Kornbluth). (However, as I’ve said before, the mark of a great story or book is not whether somebody made it into a TV show or movie, which most of the time just results in a mediocre or bad TV show or movie anyway, but whether it’s enjoyable to read as a story or book. But that "Twilight Zone" episode is pretty great.)

The blurb on the front and spine of the 2005 ORB edition says, "The greatest science fiction stories of all time, chosen by the members of the Science Fiction Writers of America," though "of all time" is actually limited to the thirty-five-year span of 1929 – 1964, and technically the contents only cover 1934 - 1963: 1929 was the first year the SFWA considered a published story to be eligible for inclusion and 1964 was the last (because the SFWA was founded in 1965, and immediately started handing out awards for contemporaneous stories), but nothing earlier than 1934 was voted into this collection, and nothing from 1964 made it in either.

The final story in the collection, Roger Zelazny’s "A Rose for Ecclesiastes," is pretty great. I’ve never read any of Zelazny’s novels (almost a crime on my part, I know), but I’ve read quite a few of his short stories, and this might be the best.