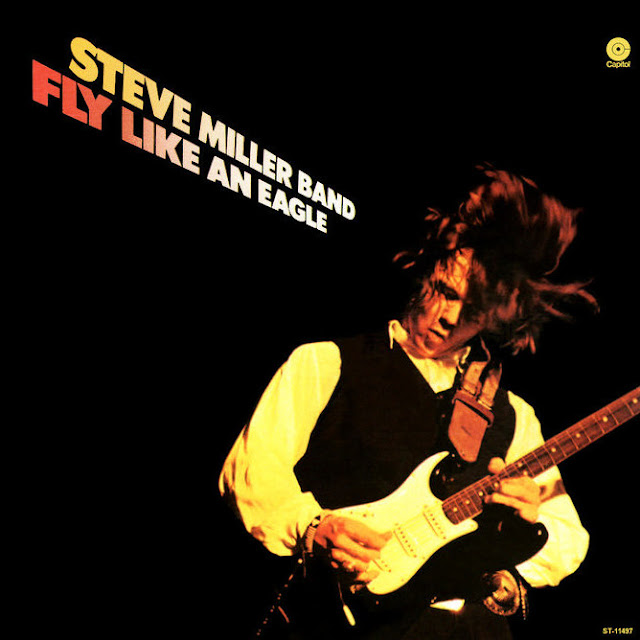 I remembered one of them recently, when J. and I were on our way home from somewhere, listening to a playlist of a bunch of old rock songs on shuffle, and the song randomly picked by MediaMonkey (one of the apps I use) was "Fly Like an Eagle" by the Steve Miller Band. It was the first time I'd heard it in a long time. I'd forgotten how hokey and pseudo-profound – but also embarrassingly sincere and actually kind of meaningful – it is, including as it does the following lines:

Feed the babies
Who don't have enough to eat
Shoe the children
With no shoes on their feet
House the people
Livin' in the street
Oh, oh, there's a solution

I can't hear this song without thinking about something Kevin said to me at least twenty-five years ago. He told me once that when he was a kid and heard this song, he thought "house the people" was an inquiry into the well-being of "the people" – not "house the people," but "how's the people?", as in (as Kevin said at the time, in a faux-Jersey accent) "How's them people? How they doin'?" (Neither of us said anything, in any accent whatsoever, about how the next line, "Livin' in the street," is a depressing reference to the homeless problem.)

I don't know if what he said was true or not; I don't know if Kevin ever actually misinterpreted the song in this way, or if he was just being silly. But I'll tell you this: Whenever I hear or think about "Fly Like an Eagle," which admittedly is not often, I can't help but hear "how's the people?" in the lyrics.

Kevin told me another time, even before he had nearly ruined "Fly Like an Eagle" for me, that when he was teaching history at a small private Christian school, the school had a Christmas store they called Santa's Secret Workshop, and that one day he heard one of his students sing "Santa's Secret Workshop" to the tune of that great guitar riff that starts off Jethro Tull's "Aqualung" – and that he surprised the student by saying, "Hey, that's Jethro Tull, isn't it?"

And now, whenever I hear Aqualung – again, admittedly not often – I hear a deep voice intoning "Santa's Secret Workshop" in the same melody as Martin Barre's repeated six-note guitar riff at the opening of the song. (And yes, in case you're counting it out on your fingers as I did, "Santa's secret workshop" and "Sitting on a park bench" – the opening line of the song, sung by Ian Anderson to the same melody – do have the same number of syllables.)

I'm sure Kevin's children know that he could be really funny – Kevin told me once that Hilary told him he was "sillier than the other dads," which I have no trouble believing he was. But do they also know, I wonder, that Kevin had friends who prized his sense of humor, were perhaps even changed by it, and who really, really miss it?

I miss Kevin. I'd give anything to hear one of his corny stories again.